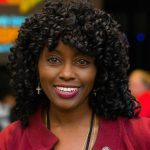 On April Fool’s Day 2000, while Angela was in Japan on military duty her husband and four children in California were in a fatal car crash. Sadly her two eight-year-old sons didn’t survive. The miracle is although Murice and Roger passed instantly at the scene God allowed both to write and leave behind incredible good-bye letters. Angela said, “Each letter was written above and beyond their age and grade level. Each letter answered specific questions that I would have wondered about for the rest of my life.”

In 2005 Angela Alexander retired from the Air Force Reserves, and now an Author & Inspirational Speaker of her autobiography titled ‘Miracles in Action ~ Turning Pain into Power and Grief into Peace’, and the Executive Producer of her documentary film.

Come out and hear the glory behind the story of this absolutely fascinating, supernatural testimony from the living God we serve!

Don’t allow what once was a miracle to become ordinary!